How to be found on the lost island. Or keep on walking.

After my experience in Rio I had one day of working on my blog, connecting with people who help me to get my challenges done and focused very much on getting things done! The results were very satisfying and since a girl from the hostel explained me that she was going to a beautiful island, called Ilha Grande, I thought about rewarding myself.

Ebony promoted in beautiful words how great it would be to stay on the island and what awesome beaches you can find over there. I was already in and decided to leave next morning, taking the bus for 3 hours, then the ferry for 1 hour and then spending the night on the island. Well that said my alarm went off on the next day at 4. I jumped into the taxi knowing just the name of the bus line and the approximate name of the city where the ferry would leave. To be honest I had no clue where I could end up.

When I came to the bus station I found out that my debut card was not working (as I experienced it now several times) but luckily the machine at the bus counter could read it for no good reason. I was happy and took off to Angra dos Reis. During my bus ride I was caught by the environment and really amazed by the richness of the Brazilian nature. I loved it. At that time I had already been thinking about moving to Rio de Janeiro. That city combines for me nature, a metropolitan and an energetic hub.

Arriving in Angra, I figured out that even though I got stressed to be on time (the boats leave very seldomly to the island) I had 2 hours to change money, get to the harbor, find the right boat and buy the ticket. The taxi driver that took me to the center spoke English amazingly well. I was really astonished after all my experience in Brazil. And even more than that he explained me that he had a girlfriend from Austria. Better said Graz. How funny was that.

I didn't like the city though. Don't know anything was kind of disturbing me. When I tried to exchange money I knew why. There was no bank offering this service and I was forced to exchange it in the only exchange office. I was pissed. This guy ripped me off just because there was no other possibility for exchanging. Was that business 3.0 ala Angra?? Well I really thought long about doing it and in the end I even decided to exchange all of it in order to be safe. (A week later I got the same rate in Sao Paulo - as well taking advantage of not having any alternative.)

Why do I need to be safe? I did not really feel the trust in myself of coming along without having enough money in my pocket. How weird is that? What confidence do I show in order to accomplish my life? No worries. I decided to put more pain on me in order to find a place to stay without paying. Well to be honest I strongly believed in sleeping outside. Even though it was raining the whole time. I would save my money since this I was nervous of making it to the end of the month. How courageous. 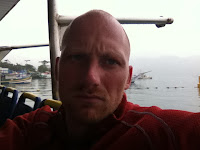 On the boat I figured it out that I was in the same situation like coming to Rio. I didn't book any place, did not know where to stay. I even didn't know the name of the village in that we landed. Though I was pretty much ok with that since I had in mind to enjoy a great rainy day on an island. It was not a beach day, so I hiked on a tourist path through the island to a natural pool and further more to a small water fall. It was really amazing and powerful. After those stressful days before my departure and my emotional roller coaster after arriving in Rio I was pleased to experience some peace and a great nature.

I walked around some hours through the woods always on the search for snakes and monkeys but I was not lucky. Resting in the waterfall and watching some other tourists, mainly Brazilians, meant also to forget about time and my return to the the village that name I didn't know. After getting thirstier and recognizing that even on this beautiful island night time meant darkness I decided to walk back in order get close to the village and sleep on the beach. Well that was my plan. I followed the trail and shortly after that I figured out that I did not know where I was or how big the island would be... There we go. After hours of walking in my flip flops and slipping over this moody earth path I was getting frustrated and pissed.
Still remembering what I asked myself back than: 'Isn't it better sometimes to plan such a trip? Do I always have to prove myself in order to find a flexible solution? Did I prevent myself from miracles if I plan things?' And so on. I was really pissed. Then finally I found a house but since it said in big letters that it was forbidden to enter. I did not even try. Something inside me told me to move on and hike back to see if I maybe went somewhere on a wrong path. And I was right. There was another trail leading to the other side of the island.

I followed that one till I took the wrong direction for another time. At that time I came out of a very impressive beach with inviting houses and nice properties... Asking for the way they understood that I want to rent a taxi boat... Well after feeling that had been ripped off I refused and was getting back angrily to some other way. Which led to an amazing beach. When I came there I was so taken by the garden full of different trees and plants. The very clean beach with white sand and those impressive houses and properties!!! Woooooooooooooooooow. When I entered there I was like being in my dream of running a high end recreational resort for people with burn out and who want to fulfill their dreams.

I even spotted a small roof under which I could spend my night. Smiling and happily I went to a person who was standing in front of the impressive beach house and asked for the way. He could not speak any English so I turned around and was frustrated again. After some steps I heard somebody calling me in English so I turned around and I saw a young girl running after me. My first thought was like: 'What a cute daughter!' :) I really believed that she was the gardeners (in my point of view owner) daughter.

She asked me if she could help and introduced herself as 'Julia'. Can you imagine that? Being lost on a lonely paradise island and meeting a gorgeous girl that speaks perfectly English that is offering you water with a big smile? I shook myself to wake up. Well didn't work out. I was very happy to get some water and talking to her in English after this long trail was a big release.

Julia also showed me around the property which was a 7star resort and included a soccer field, a sauna, a helicopter landing space and so on and so on. It was just amazing. I learned that she was not the daughter but the executive who built up the whole place there. Wooooooooooooow. That was all like a dream. A dream that is still going on and that offered a meeting with the Austrian princess some Brazilian movie stars... Let's see what this will lead to! Stay tuned and share your experience with getting lost and finding something more beautiful!